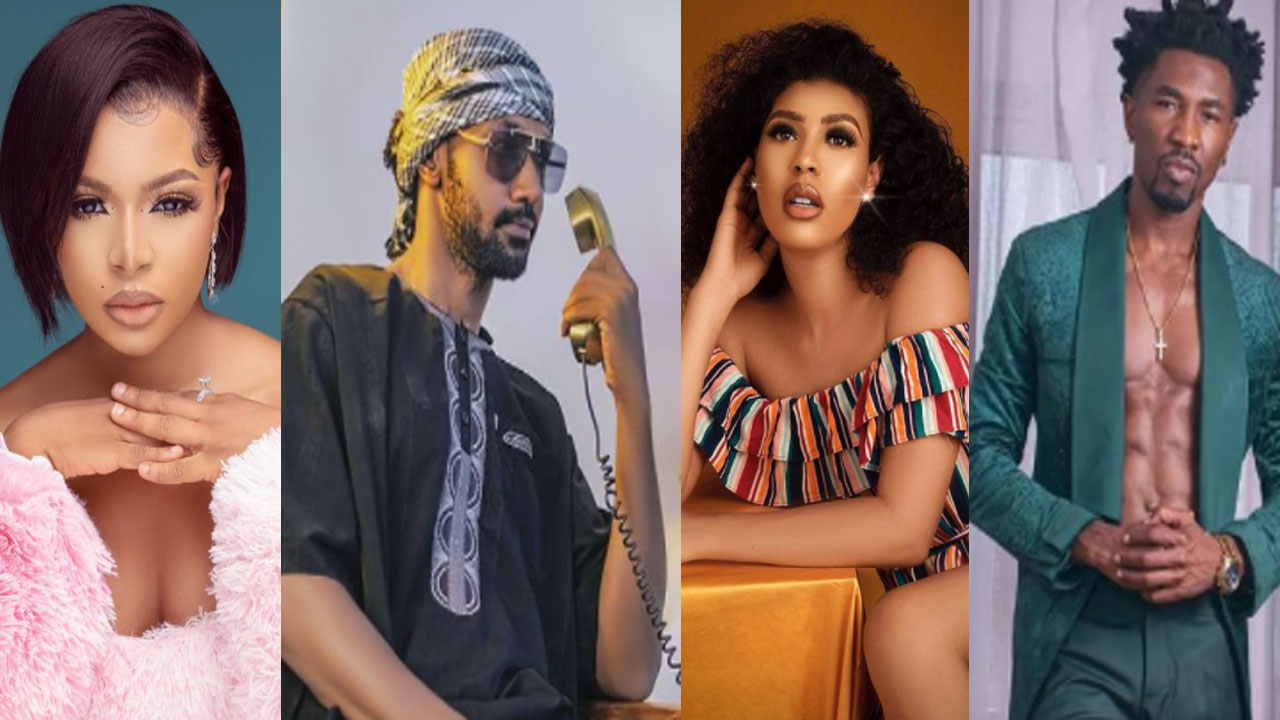 BBNaija Season 6 – The sixth season of Big Brother Nigeria (BBNaija) dubbed the Shine Ya Eye season is currently underway and all the 22 housemates have been ushered into the BBNaija 2021 house.

There are 22 housemates in total with two out of the 22 housemates being wildcards who will be evicted in the first week if they are made out during Sunday night’s eviction.

Here is a full list of BBNaija Season 6 Housemates and their profiles.

Boma Martins Akpore is a footballer, a model, & a mixologist. An only child, he was born and raised in Lagos, Nigeria. An indigene of both Rivers and Delta States. Boma grew up playing soccer, hoping to play pro someday and in 2003 he began his stellar modeling career before being chosen for a campaign with one of Africa’s largest telecommunication networks.

28yr old Saga Adeolu is an engineer who plans on ditching his engineering career for entertainment after this season’s BBNaija. He is also a fitness coach and a massage expert.

Yusuf Garba Adamu was born on the 14th of April 1992 in Jos, Plateau state. He is a graduate of the University of Jos, where he studied electrical electronics

Yousef is also a professional model who has won Mr. Unijos in 2015 and a Jos Carnival King in 2018.

Pere Egbi hails from Bayelsa, was born and brought up in Warri. He identifies himself as a multi-talented Individual, An artist, and an entertainer. He celebrated his 26th birthday on 28th June 2021.

Identifies himself as the CEO of MoneyGang. Whitemoney is a businessman – into importation and sales of footwears. Before joining this year’s BBNaija, Whitemoney appeared in a couple of comic skits with known characters like Nasboi and Josh2Funny.

Niyi Lawal is the first son of the family. Loves sports and travel. Niyi used to play basketball but had to quit the game and venture into a business of his own. He is 34yrs old and happily married with a child.

27year old Yerins Abraham is a multifaceted individual. A medical doctor, artist, musician, fashion designer, and much more. He loves to be identified as a polymath. An indigene of Bayelsa State and the first child of his parents.
Yerins believes that there are no limits to what you can achieve.

J Paul is a native of Cross River State and he describes himself as a butterfly because he belongs to nobody and everybody.

Emmanuel Umoh is a former winner of Mr. Africa and Mr. Ideal Nigeria in 2019. He has been identified as gay.

Sammie is a native of Kaduna. He promised fans he will talk throughout the show. He has the personality of a street hustler.

Drama King Cross Ike is a lover of aerobics. Going into the house, Cross revealed he lives his life by the rule of love.

Angel is 21yrs old from Akwaeke Ibom. She is a fun person, entertaining, and more of a talkative. An aspect of Angel that can’t be overlooked is the fact that she likes acting bossy.

Angel has 11 tattoos. She loves poetry and acting.

Peace is a party girl. She’s 26yrs old from Rivers. She loves funny people, likes to relax, eat and sleep.

Peace is a fashion entrepreneur and was a tv presenter. She’s single, not searching.

Tega Dominic has the personality of fire and ice. She loves to dance and doesn’t like wearing clothes – mostly naked. She is an all-around entertainer.

Arinola Olowoporoku is a 29-yrs-old fashion designer from Ekiti State. She is lively, bubbly, and trustworthy. She has 17 piercings left after closing 7 of them. She started life as a cultural producer, but she is currently an art curator.

Imo State native Maria Chike Benjamin is 29-yrs-old. Maria dislikes untidy and dirty people. She is a realtor in Dubai and she’s currently working towards extending her business in Nigeria.

Roseline Afije is a 26yr old dancer from Edo State. She is a founding member of the famous GGB Dance Crew with millions of followers across various social media platforms.

Beatrice Agba Nwaji is a native of Rivers State but she is based in Lagos. She is a graduate of Marketing from the University of Portharcourt. Beatrice is a digital marketer, a model, an actress, a content creator, and an entrepreneur as she runs her own fashion line.

Princess Uju Francis is 30yrs old. She comes from Imo State. She is a taxi driver by profession.

Saskay is from Adamawa State. The damsel is 21yrs old and she’s filled with a lot of talent and knowledge. She loves food and totally dislikes loud people. She is an artist and a model by profession.

Born and raised in Auchi, Edo State is Singh Nini. Nini is 26yrs old. She owns a fashion brand and doubles as a contract model. She is dramatic and entertaining.