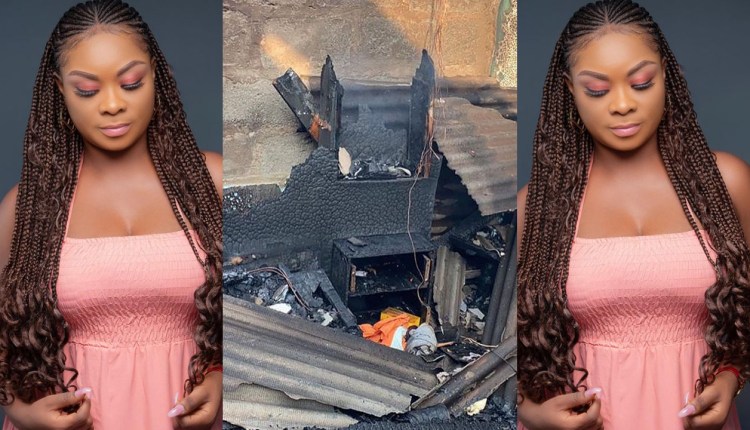 Beverly Afaglo‘s management has issued an official statement regarding the actress’s loss of all valuables due to a fire.

The Ghanaian actress’s house in Tema went up in flames two days ago leaving her with nothing as she revealed everything in her home was burned to ashes.

Fans and celebs of the Ghanaian actress, who is married to Choirmaster of Praye fame have expressed their condolences to her after her severe loss.

People have been asking how they can support the actress, according to a statement released by Cine God Studios, her management company therefore they have thought it wise to set up a momo account to receive all contributions on her behalf

Management has since been inundated with calls from fans, well-wishers and colleagues in the industry, many of whom have expressed willingness to offer support to the actress at this difficult time. Hence account numbers have been added to this release after a consensus, for all and sundry who would want to make donations to aid the actress to recover from this tragic loss” the statement said.

We would like to state emphatically that this decision is Management’s and not the actress’. Once again, thank you all for the love and support. Both Management and Beverly sincerely appreciate them. MoMo Number: 0557386933 Name: Trudy Ameko B.A.B Handy Man Ghana Limited 1234567890123

The post Beverly Afaglo’s management drops her momo details for Ghanaians to support her after losing all her properties for fire appeared first on Gossips24.com.