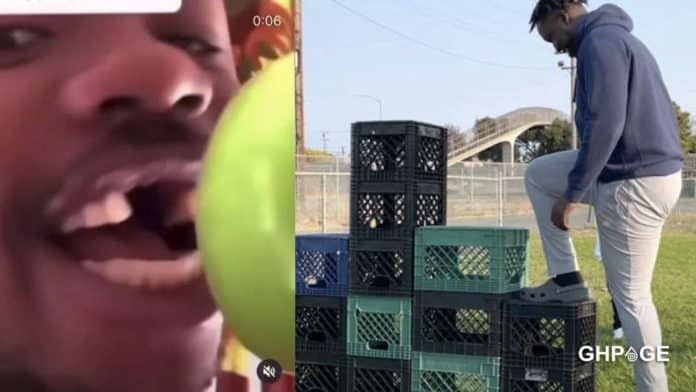 The “Milk Crate Challenge” is the latest in a genre known as ‘fail videos. This challenge is very dangerous as a lot of fatalities have been recorded ever since its inception in the second week of August.

The “Crate Challenge” has taken over social media trends most especially Tik Tok.

The challenge involves stacking milk crates into a pyramid-like shape, with both sides of the pyramid functioning as stairs

After falling from the crates, a young man who wanted to participate in the ongoing crates challenge has lost his front teeth.

Giovani Caleb, a host at Media General, posted a video of the young man straining to swallow an apple.

He captioned the video with the words below;

I asked him to mention CRATE CHALLENGE…

Aswerigad I DON’t know this guy. He’s a product of the #CRATEchallenge #apple #diastema #toothGap.

Aside from this guy, a lot of other people have also broken either their legs or arm after falling from the stacked crates.