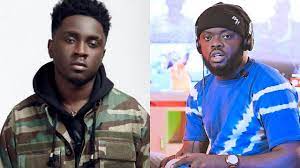 Over some time ago the content creator exchange words with the rapper on social media.

Kwadwo Sheldon happens to be a content creator who often reacts to the happenings of the industry and shares on his monetized YouTube channel.

Due to this, Kweku Smoke made a post on Twitter in which he asked Amerado and Obibini to stop beefing because they were giving the big head money, was seen as a shade to Kwadwo Sheldon who also replied quite quickly.

The two went back and forth severally with Kwadwo Sheldon telling Kweku Smoke his hairline is more relevant than his career.

See the posts below;