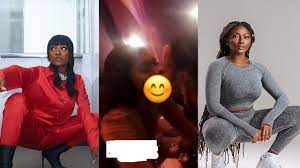 These two well-known Ghanaian female musicians have sparked l3sbian rumours as they were captured on camera locking their lips affectionately.

Efya, a Ghanaian musician and S3fa, a Black Avenue Music signed act were spotted kissing in a club in a viral video.

In the video that has lit a new conversation piece on the internet, Efya approached S3fa at her table, called her over, and the two kissed each other as if they were lovers.

Before this video surfaced online, some internet users have asserted that Efya loves females as much as she loves guys making her a bis3xual.

The post Efya and S3fa sparks l3sbian rumours as they affectionately k!ss in a new video appeared first on Gossips24.com.